1’
Lena Untertrifaller
12 June 2019
1’
FOOD WASTE: Time for a sustainable consumption lifestyle -
According to the report “Estimates of European food waste levels” of 2016, around 1.3 billion tons of food end up as wasted food in the garbage every year in the EU. Most of the food is not harvested, or thrown away after having been harvested, because it does not fulfill the expected standard of shape and appearance. This applies, for example, to two-legged carrots or misshapen cucumbers. Further reasons for the loss of food is a lack of purchasing plans or the exaggerated caution regarding best-before dates. In the EU, approximately 173 kg of food are discarded per person per year, which in total yields 88 million tons of wasted food annually. It is astonishing that more than half of that is thrown away in private households (53%), followed by processing (19%), catering (12%), production (11%) and at last, wholesale and retail (5%).

The enormous waste of food is not only negative for the environment, but it is nowadays also seen as an ethical question. Several organizations, associations and initiatives all around the world are committed to tackle this problem, for example by raising awareness among their members through various activities (workshops on sustainable consumption, food-sharing, cooking together with saved food etc.). 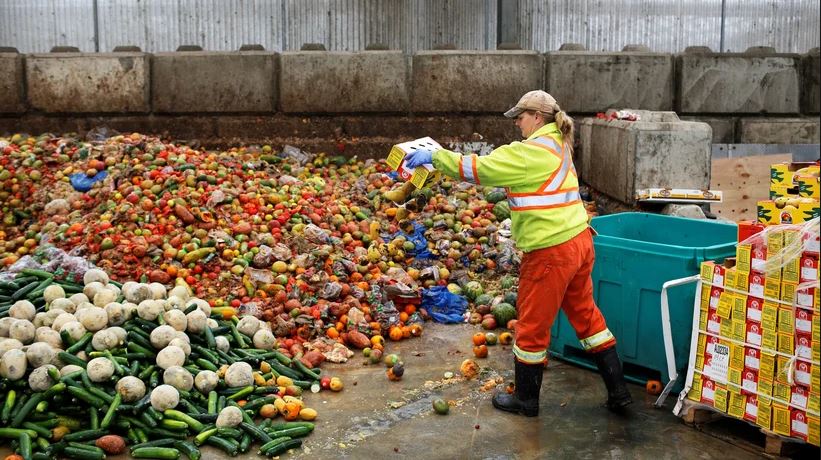 Politicians in many countries have also recognized the seriousness of the situation and acted accordingly. As an example, in February 2016, the French parliament approved LOI n. 2016-13, a law whose main aim is to raise the awareness of this issue among all stakeholders, in particular grocery stores. Anyone who breaks this law is subject to heavy fines up to 3750€. Another more recent example comes from the Autonomous Province of South Tyrol, who also declared war against the food wastage by establishing, on the 13th of March 2018, a new law to “promote initiatives against the waste of food and other products”. The aim of this law is:

“[…] to regulate the handling of surplus food, medicines and other non-food products to counteract social emergencies and poverty. It is intended to enhance solidarity and charity, based on the principles of social responsibility, and to contribute to sustainable environmental sustainability    by avoiding as far as possible waste at each stage of the production, processing, distribution and distribution of food and other products”.

This law not only opposes wasting of food, but also saves medicines and other goods, such as clothing, and re-distributes them among the people in need.

In 2018, the Association of “Hotelier and Restaurant Südtirol” (HGV) launched an awareness campaign in South Tyrol with the motto “Zu gut – troppo buono”.  The HGV South Tyrol wanted to raise awareness about conscious food consumption among guests and business owners alike, by using free boxes to take the leftover food simple at home.  Also, other organizations and associations in South Tyrol provide good examples of saving food daily. The FoodNet BZ (Bolzano) is a network of food service associations which collects surplus food and distributes it, free of charge, to charitable institutions and people in need in South Tyrol. The organization Volontarius Onlus is part of this network, which aims to save food. The group “Bröseljägergruppe” from Volontarius Onlus, for example, managed to collect around 509.000 kg of food in South Tyrol in 2017. An increasing number of shops are also campaigning against the waste of food by providing a gift shelf or refrigerator in their shop where food can be exchanged or taken home free of charge. On Facebook there are now also countless groups in which left over food can be offered to other Facebook users before a weekend trips or holidays.

Unfortunately, it is not uncommon that freshly baked bread is thrown away shortly before the closing time of the bakery, or withered vegetables are discarded at the groceries. It is even frightening how much food ends up in the garbage after sales. This has led to the rise of “dumpster diving” (looking for food in the garbage bins of supermarkets), just one initiative among many to reduce the food waste. Most people do dumpster diving alone and at night, when the supermarkets are closed and there is the smallest chance of getting caught by someone, since dumpster diving is illegal in Italy, as in many other countries. Most of the people certainly think that dumpster diving is unhygienic, dangerous and deplorable. However, I am convinced that we cannot judge, whatever the reason is, for necessity or belief, anyone who does dumpster diving.

There are many possible ways of pursuing sustainable food consumption or lifestyle. Even in South Tyrol, since a long time, this topic has ceased to be a taboo subject. But the first step begins from us, through very simple actions. As an example, read the best-before date and consider if it is really necessary to throw the food away. The date merely indicates how long the manufacturer guarantees the shelf life of the products – many foods are also edible days, weeks and sometimes even months after the best-before date! Finally, a few tips for a sustainable and careful food consumption: have a heart for vegetables and fruit with blemishes! The chances for crooked cucumbers or already germinating potatoes are not very high in supermarkets as they do not meet commercial aesthetic standards. Another tip is to store food correctly: many foods are not stored properly and therefore end up in the garbage. Also, conscious shopping – think about what you need and do not let yourself be tempted by offers “Buy three pay two” – can be helpful to avoid food waste. If you still have some food at home that you cannot use on your own, share it with other people.

In order to give you a better service this site uses cookies. Additionally third party cookies are used. By continuing to browse the site you are agreeing to our use of cookies.