ScienceBlogs
Home
Covid-19 And Beyond

An interview with scholar-activist Trebor Scholz

The platform economy of the digital age has radically changed business models, resulting in the rapid growth of numerous platforms such as Airbnb, Uber, Facebook and Deliveroo. However, the crisis of platform capitalism can be observed worldwide. Precarious working conditions for employees and freelancers, wage dumping, extreme economic inequality and the dwindling influence of unions are just some of the symptoms that were further intensified in the Corona crisis. New monopolies are displacing smaller companies and the majority of supply chains are anything but sustainable.

Contrastingly, at least 12 percent of the world’s population makes up one of the 3 Million cooperatives worldwide. Cooperatives allow people to take control of their economic future and, because they aren’t owned by shareholders, the economic and social benefits of their activities stay in the communities where they are established, as the International Co-operative Alliance defines. Trebor Scholz, scholar-activist and founding director of the Institute for the Cooperative Digital Economy at The New School in New York City, coined Platform Cooperativism, by combining platform economy with a cooperative model to create a digital economy from which all people can benefit equally.

Trebor Scholz: Well, cooperatives have been in existence since 1844, at least that’s when the first cooperative that we would recognise as such was founded, namely the Rochdale Pioneer Society in England, which was created in the middle of industrialization because people were hungry and wanted to feed their children. It was as simple as that. They created a consumer cooperative to buy good meal, butter, flour and so on. Out of that worker cooperatives also developed, giving a voice to each worker and trying to create social justice and democracy in the workplace. Platform Cooperativism as I created it in 2014 is a way of taking this proven model into the internet age and further developing it by providing a hub to start platform cooperatives worldwide. Platform cooperatives are businesses that use a website, a mobile app, or protocol to sell goods or services. They rely on democratic decision-making and shared ownership of the platform by workers and focus on fair and dignified working conditions. At this point only one in a thousand people would know what platform coop is, given that there are only about 500 of these cooperative digital projects around the world.

However, the grassroots-movements behind those projects are a powerful counterforce to monopolies and precarity everywhere. An example is smart.coop, a cooperative based on a legal hack that turns independent contractors into employees of the cooperative.

If you are a freelancer, Smart takes your fee and pays you a monthly salary, they take care of your accounting, establish a mutual risk emergency fund, pay health insurance and are developing a pension fund. Especially in times of the current crisis it became clear again how much such initiatives are needed. Some people even gained citizenship through Smart because they were able to demonstrate their employment.

In a recent workshop in South Tyrol you said that cooperatives are created out of necessity. What was the tipping point for you, the decisive impulse to found Platform Cooperativism?

Scholz: It was a clear moment. Like a real event. I was giving a keynote speech at re:publica, a large media conference, and was talking about the situation of crowdworkers, the people who work for Platforms like Amazon Mechanical Turk or Upwork. That is just a really dark subject. Crowdworkers earn about two to three dollars an hour. I remember talking to lawyers who couldn’t believe it, because being paid two to three dollars an hour is just illegal. Well, but that is exactly what’s happening. There’s this huge legal grey area. I worked on that for more than 10 years. But in 2014, when I gave this keynote speech, I saw about a thousand listeners, all of whom were sinking deeper and deeper into their chairs because it’s just so sad and there really seemed to be nothing anyone could do about it. Regulators didn’t take action. The policy makers didn’t do anything. The workers? Well yes, they wrote letters to Jeff Bezos, and there were some nice projects that tried to connect the workers, which was fantastic, but they didn’t change working conditions.

So, my question was, how we could actually intervene. That’s quite unusual in academia because there isn’t much openness for getting involved, for getting your hands dirty so to speak.

If you are an PhD student you are told to observe, to record and analyse but not to get involved. So, in 2014 I sort of broke with that rule and suggested a way the inequities could be addressed, fixed perhaps, and that framed this idea of Platform Cooperativism. 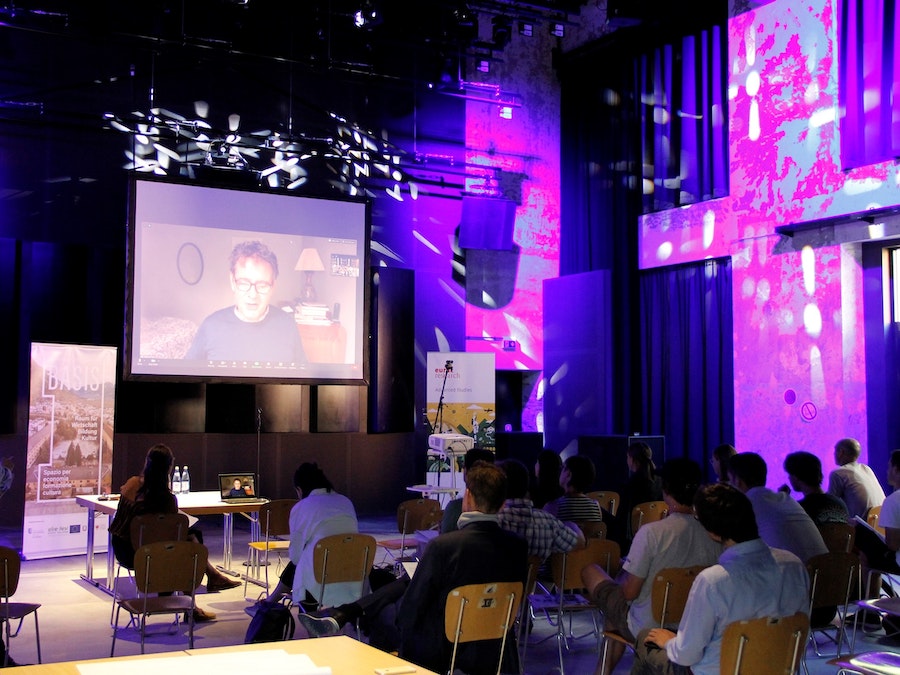 Workshop with Trebor Scholz in the Kasino at Basis Vinschgau Venosta.

In South Tyrol we have noticed that the Corona crisis has helped to create new cooperative initiatives like AgriHelp for example, an initiative that connects farmers with motivated helpers. How do you assess the current developments? Could the crisis be a turning point towards a fairer economy and better collaboration?

Scholz: Well, I would indeed define the current situation as a really cooperative moment. In the US, 30 percent of people couldn’t pay their rent in July and are facing eviction. Half of the population is unemployed and the support checks from the government are running out, so it really is a boiling pot. Such conditions have always been starting points for cooperatives. Not only in the US, but also in many other countries, it is realistic to be pessimistic about federal government. There is just a deep distrust in the leads and institutions. If you look at labour law in the US, it hasn’t changed significantly in favour of workers since 1972 – hardly surprising given the American mindset. The Fountainhead by Ayn Rand is probably one of the most influential books in the US and basically preached that you can only rely on yourself, it advocates deep individualism, not to help others and to be completely self-sufficient. That also very much forms the ideology of Silicon Valley and thus a great part of Platform Economy. So, to change that mindset it’s not about having a good proposal or even having something that works fantastically well. Still you would have to convince people that its something good. What’s interesting about this movement around Platform Cooperativism is that it’s actually a rare instance where members of different parties can agree. You have two camps. Some people are only in it for the economy. One could say they want to bring home the bacon and then there are others that want to destroy capitalism. They are there for different reasons and yet they are all in this together.

What are your tips for involving and encouraging people to participate in new initiatives?

Scholz: Sometimes it’s like you’re sitting at the university, you draft up your idea, and then you go to the people and say, look at my wonderful idea, why don’t you join me. But that is not how it should work. It should really come out of a real necessity. Platform Cooperativism is based on real needs. The idea of going and telling somebody what to do is not going to work. It is more about creating an opportunity with them, working alongside and showing the problem is a shared one and we need to collaborate.  When we were looking for our partners in Italy, I called up all the people I knew, from Liguria to Sicily. They could not imagine working together but then they did. That was fantastic. And then, it is important not to think of it as just one project. It is not about creating an App. That is very important.

So, what is the main reason for people to become involved in a cooperative?

Scholz: It is a very different mindset than that of Silicon Valley. Big tech is exactly what Platform Cooperativism opposes. You have monopolies in everything, from agriculture to medicine, to social media. This market power is one of the main reasons why people are joining us. Because are we really at peace with the idea of our internet being controlled by five large companies? This lack of choice becomes even more present if you consider that 70 percent of our internet referral traffic is routed through sites that are operated by Facebook or Google. So here it is really about an ecosystem. It is about a group of different projects. If there is a commonly understood problem, like in tourism or agriculture, a whole valley works together to create benefits for each other. An initiative has to be local, very much so and it has to come from local people, but it is not about one single valley. And I am not coming in, telling people what to do, because they know much better what to do. It is just about connecting them with the technology and seeing how to do that in ways they maybe haven’t thought about before. People do this already. It is not that we had the brilliant idea that people in South Tyrol should work together. I am sure they have been doing this for a long time.

The results of the workshop with Trebor Scholz will be presented at the Churburger Wirtschaftsgespräche 2.0 – Economy and society in the digital age: An opportunity for local economies?, a conference organised by the Center for Advanced Studies in cooperation with Basis Vinschgau Venosta on October 30th in Sluderno/Schluderns.
For those interested in establishing a cooperative platform, we recommend an upcoming course starting in October. For further information please visit platform.coop.

In order to give you a better service this site uses cookies. Additionally third party cookies are used. By continuing to browse the site you are agreeing to our use of cookies.