The shift to a Circular Economy model in rural regions’ agri-food sector: how much do you know about it?

1’
Francesca Teston
29 August 2018
1’
The shift to a Circular Economy model in rural regions’ agri-food sector: how much do you know about it? -

Did you know that 40% of EU soil is occupied by the food system and that more than half of the total EU annual waste is agricultural waste (0,7 billion tonnes out of the 1,3 total)? The agri-food sector is especially relevant in rural regions, like South Tyrol for instance.
To stop this crucial sector to be so wasteful and to give an opportunity for sustainable development to rural regions, we must design a different way to organize agri-food production. The Circular Economy model is certainly our ally in this task! There are a number of conditions and actions that can facilitate this shift from the current almost entirely linear system to a circular one. How familiar are you with them? Test your knowledge here below!

Before starting: what is circular economy (CE) in general terms?

CE is an economic model that involves all actors of the society and aims at a fully sustainable, zero waste production and consumption. The model functioning is based, in parallel, on decreasing the amount of resources extracted and used in the production, on prolonging the life cycle of a product, on using renewable energies and on introducing new consumption model that privileges “sharing” instead of “owning”.  In the last years, the European Union is giving more and more attention to circular economy. In March 2018, the circular economy package , which includes a number of measures and subsidies to foster the shift to CE in Europe.

A1: Bio-waste (ehm…products)! The usual linear agri-food system, based on make-use-and-dispose, is no longer sustainable. Let’s just think that in Europe ~46% of edible mass of fruit and vegetables is lost or wasted. This underexploited source of bio-waste represents a major opportunity, especially in rural regions, where the production is located, for the development of a circular economy through innovative technologies and profitable business practices. 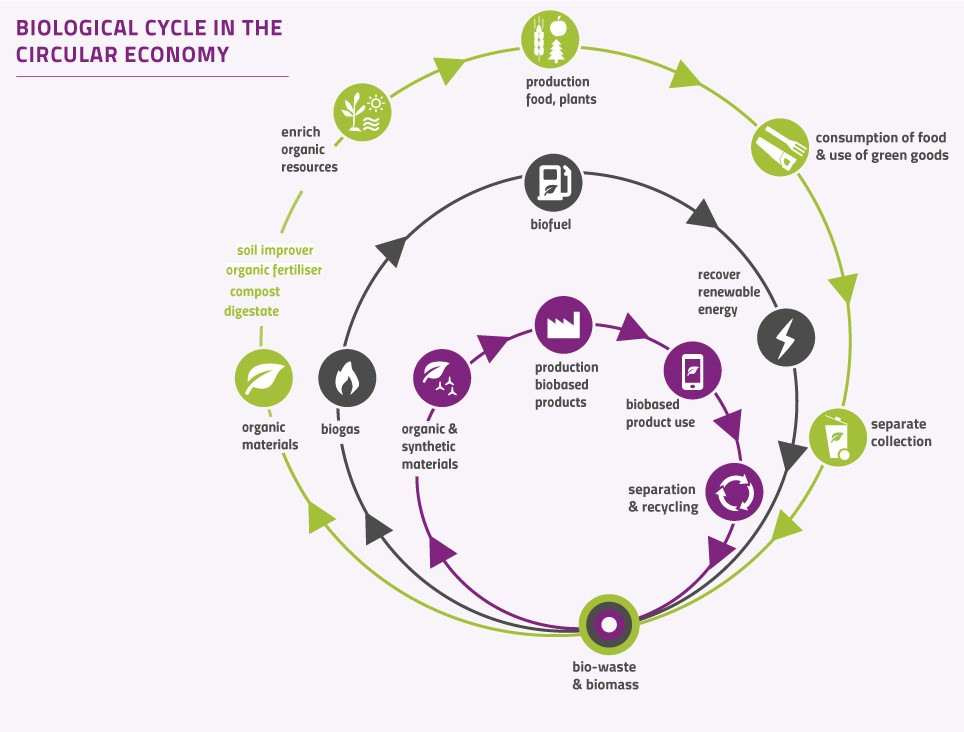 Q2: Who is responsible for the shift to CE in a rural regions?

A2: Each actor, as a single entity… and as part of a system! CE implies change to happen at three levels: micro, meso and macro. The adoption of a circular economy at micro level entails companies to improve the circularity of the production system. An example would be a dairy starting to use its whey -that would otherwise be wasted- to produce, for instance, natural beauty products. At the intermediate level, this means carrying out industrial symbiosis, so that industries traditionally working as separate entities become engaged in complex resource exchanges. Building up on the example above, the dairy could start selling its whey to a neighbouring cosmetics firm. In more advance stages, both actors could be located in the same eco-park, meaning and area where not just materials and by-products but also water and energy exchanges can easily happen.  Finally, CE development at macro level implies integrating and re-design not just the production, but also the consumption system and its components (infrastructure and service delivering, cultural and social systems) in a circular and more sustainable way. This means creating for example a collaborative or a zero-waste consumption model for the above mentioned dairy products and cosmetics.

Q3: Can economic incentives facilitate the shift to CE?

A3: Definitely yes! Regulatory instruments play a major role in facilitating the transition of a rural and regional system to circularity. At global level, there are, on the one hand, instruments based on a top-down approach, as command-and-control instruments (e.g. regulations and quality standards designed and imposed by the government). An example is the circular economy national strategy in China, adopted in 2002 and constantly updated through the five-year-plans. On the other hand, there are instruments based on a bottom up approach, which result in market-based (alias economic incentives) and voluntary instruments. The bottom up approach is currently the most popular in Europe, where environmental organizations, civil society, NGOs are calling for greener products and adequate legislation. Economic incentives (EI) are in principle more cost efficient than the other options. They work by altering the structure of pay-offs that agents face, in other words, they encourage individuals or firms to voluntarily change their behaviour and re-use of bio-waste as raw material because this is economically convenient. EI can be applied through taxes on polluting emissions (e.g. tax on creation of waste), or through offering subsidy for polluting emissions abatement. In both cases they give a monetary value to the environmental harm.

Q4: South Tyrol agriculture system is not appropriate for CE, true or false?

A4: False! South Tyrol employs 5,1% of the total workforce in agriculture (7,8% if we consider also part time workers)  and produces 4,5% of the total added value (VS Italian average: 3,6% and 2%, respectively). These are the appropriate conditions for the region to become a test area. The environmental awareness of the stakeholders involved in the agri-food system of South Tyrol is already quite high (e.g. spreading of bio energy production, increasing relevance of biological production) and the socio economic characteristics (number of trade association and cooperativism heritage in the agri-food sector) create a rather fertile environment for circularity.

Summing up: Circular economy in general is about making the production, distribution and consumption more clean and efficient. Rural regions as South Tyrol can fully benefit from this model for their agri-food sector. By up-cycling by-products locally produced, CE allows to increase the security of supply, to create new professional positions and therefore job places. From the environmental perspective CE reduces the amount of waste and CO2 emissions produced and the land exploited.

The Institute for Regional Development of Eurac is currently studying the Circular Economy and, through the project CirculAlps, its application in the Alpine forestry sector. Interested in learning more about CE economy and sustainable practices of local development? Keep reading our blog…the way forward starts locally!

Ellen Mac Arthur Foundation (2015) McKinsey Center for Business and Environment. Grow within: a circular economy vision for a competitive Europe.

European Commission (2014) Turning waste into a resource, moving towards a circular economy, Briefing

Ghisellini P., Cialani C., Ulgiati S. (2016) A review on circular economy: the expected transtition to a balanced interplay of environmental and economic systems in Journal of Cleaner Production 114: 11-32

Pavwelczyk A. (2005) EU Policy and Legislation on recycling of organic wastes to agriculture. International Society for Animal Hygiene; 1.

Making Pubilc Space Sustainable! Let's start with a Definition and some Measurements